Our final event at the 2017 NYC Cider Week is deserving of its own write up. Heritage Radio Network hosted the event, which was a celebration of the Newtown Pippin apple. (Heritage Radio posted some of the audio for the evening here.)

Gidon Coll, founder and owner of Original Sin Cider, started the evening with a presentation about the history of the Newtown Pippin apple. The Newtown Pippin is arguably the most American of all apple varieties. It originated in Queens, New York in 1740, and that first tree in Queens survived until 1805 when it died from the over-cutting of scion wood.

Following Gidon's presentation there was a brief discussion about the apples that were on hand for tasting. There were apples from New York, Virginia, California, and Oregon which had been organized with each state on its own table. At this point we all got up and went back into the main room to sample slices of the apples. Just looking at the apples it was striking how different they all looked, and these were all Newtown Pippins!

Latitude seemed to play a role in how the Newtown Pippin grows and develops. One example of this is that in Virginia the Newtown Pippin is referred to as the Albamarle Pippin. It was long believed to be a different apple altogether, until DNA testing in 2009 showed them to be the exact same variety.

As I made my way around the room sampling the variety of apples I started noticing similarities between the New York apples and the Oregon apples and between the apples from Virginia and those from California. Another difference that stood out was that some of the apples were oxidizing and turning brown much more quickly than others. The rate of oxidation points to sugar content and, more importantly, the acidity of the apple.

Finally, there were distinct differences between apples from within the same state. The soil in which the tree grows and the amount of water those trees see changed the character of the apple greatly. Two of the California apples came from orchards that are across the street from one another. One orchard is dry farmed and the other is irrigated. There was a very noticeable difference between.

There are more than 7,500 known varieties of apples grown throughout the world, and 2,500 different varieties grown in the United States alone. Considering we were tasting the differences between apples of the same varietal from two orchards, divided by a road, with such different flavors, it really hit home just how much potential there is for breadth in the varieties of hard cider that can be produced.

The apples in the collage above are just a sample of what was available for tasting. The top row is all California apples and the bottom row is all Oregon apples. Left-center shows apples from New York and in the right-center are apples from Virginia.

The group reconvened to discuss our experiences tasting the apples themselves. Dan Pucci (@danpucci), Ryan Burk, head cidermaker at Angry Orchard, and Darlene Hayes (@allintocider) then led us through a tasting of 18 different Newtown Pippin ciders. My notes from the tasting are shown below with the photos of the bottles.

A few things that stood out to me:

Note: There were four ciders that we sampled, but were unable to get photos of the bottles. Those ciders were: 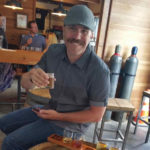 May 2, 2019May 7, 2019 Elisabeth Osmeloski
For the second year in a row, we're headed to GLINTCAP - The Great Lakes International Cider and Perry Competition as

November 15, 2017January 2, 2019 Matthew Ostrander
Every year we have an event that takes us to New York City in the fall. You can imagine my

January 16, 2020December 28, 2020 Elisabeth Osmeloski
January 2020 kicked off with two very important campaigns in the craft cider world that we couldn't be more pleased